skip to main | skip to sidebar

Nothing to say really, except that there are photos here.
Posted by Nakku at 3:55 PM No comments:

Thomas has become obsessed with Doctor Who. He is also starting to want to assert his independence and demand private space. This is manifesting in amusing signs that he writes when he's cross. A few days ago he did this one:

Beware Cybermen! however gosin will be Deleted Exept thomas.

He also made one that says:

go away.
push-off.
Seeya.
remeber that?
yes?
don't you foget it!

And another that says:

Keep out! Espeshely you Natalie!

The last is my favourite, because Natalie can't read yet.
Posted by Nakku at 9:35 PM No comments: 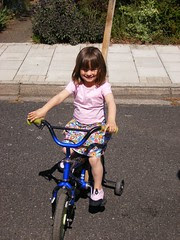 "Once upon a time there was a hole in this road. But then one day a mens came, and it was a fixing mens, and they fixed it!"
Posted by Nakku at 10:38 AM No comments:

A question for the ages

Is it better to have two slightly weak gin-and-tonics, or one really strong gin-and-tonic?
Posted by Nakku at 10:48 PM 1 comment:

Again, not so much with the posting

This does seem to happen.
I've been spending a lot of time annotating and editing my recordings, trying to make sure that the transcriptions are accurate, and fixing up the first-pass translations I did ages ago. This takes up an unbelievable amount of time.
And there's a bunch of papers I've been working on.
And my thesis which needs to be bookified.
And a conference I'm organizing.
And, you know, the kids, and stuff.
And generally dicking around.
You know how it is.
Posted by Nakku at 10:09 PM No comments:

I quite often cycle late at night, usually back from Cambridge but occasionally from Foxton (for a change). A few weeks ago a deer burst out of some bushes in front of me on a particularly dark stretch between Fowlmere and Newton, which was nice though somewhat surprising.
However, although I am usually three sheets to the wind, I've noticed that this section of road (Shelford Rd), between Newton and Little Shelford and just next to St Margaret's Mount, is for no apparent reason unaccountably creepy.
It is my opinion that this is because it is haunted by the ghost of either Mad Dog Morgan, Mad Dog McGraw, Mad Dog Maguire, Mad Dog Munro, or Mad Dog Morris. Whichever one it is, he makes it downright unpleasant. As soon as I turn onto that stretch of road I have the distinct feeling that something scary is chasing me, all the way along and under the M11, and until I actually get into the village.
Perhaps I shall choose to go a different way.
Posted by Nakku at 9:02 PM No comments:

I am spending the night in Singapore Changi Airport waiting for a flight to London in the morning. There are certainly worse airports to spend the night, although I must admit I have spent a lot of time in Changi over the last couple of years and it is starting to get a little dull.

Yesterday was my last day in Wioi, which also coincided with the villages 155th birthday, so there was quite a knees-up. I was called up on stage to say some incoherent words, and then Om Bert got up and gave a stirring speech in Toratán about how important the language is, and if I could go to all that effort of coming from England to learn about it, then young people in Wioi could too. It was a nice speech and the old people nodded in agreement. The young people didn't understand a word, of course. Oh well.

Anyway, it was a productive fieldtrip, I think. I got several good long conversations and stories recorded and got some way to transcribing them before leaving, and managed to follow up some things I thought might be interesting.

I also had plans to do a few other non-work things - climb one of the volcanoes, go to the beach, do a dive course. I didn't do any of those. I did (today, just before it was too late) manage to catch up with our old neighbours in Woloan and see how our anak baptisan is going (fine). He is 17 months old now. He liked the toffees I gave him and smeared sticky handprints on everything, then threw a ball at my head several times.
Posted by Nakku at 3:44 PM 3 comments:

Nakku
I'm a linguist living in Melbourne. If I wasn't spending so much time changing nappies, perhaps I'd be documenting endangered Indonesian languages. Nakku (properly Daeng Nakku') is my Makassarese nickname, it means roughly Mr Yearning, which I always thought sounded like Mr Homesick, a bit sissy (NTTAWWT), but it was explained to me that it means that other people are yearning for me. My real identity is kept secret to protect me from teh crazy of the interwebs. Only those with extraordinary detective skills will be able to find it out. Contact me: nakkukku@gmail.com

This is one of my favourite Makassarese idioms: tena tau tampaui “no-one doesn’t say it” (ie. everyone says it). They are big fans of the double negatives.

This is a Flickr badge showing public photos from nakku. Make your own badge here.